Within the Holy of Holies, shielded from the eye of the common man, was one piece of furniture comprising two parts: the Ark of the Covenant and the atonement cover (or “mercy seat”) on top of it. The ark was a chest made of acacia wood, overlaid with pure gold inside and out. It was 3 feet, 9 inches long and 2 feet, 3 inches wide and high. God commanded Moses to put in the ark three items: a golden pot of manna, Aaron’s staff that had budded, and the two stone tablets on which the Ten Commandments were written. We will discuss these three objects in further detail below.

The atonement cover was the lid for the ark. On top of it stood two cherubim (angels) at the two ends, facing each other. The cherubim, symbols of God’s divine presence and power, were facing downward toward the ark with outstretched wings that covered the atonement cover. The whole structure was beaten out of one piece of pure gold. The atonement cover was God’s dwelling place in the tabernacle. It was His throne, flanked by angels. God said to Moses: 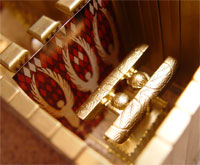 “There, above the cover between the two cherubim that are over the ark of the Testimony, I will meet with you and give you all my commands for the Israelites.” (Exodus 25:22)

“Tell your brother Aaron not to come whenever he chooses into the Most Holy Place behind the curtain in front of the atonement cover on the ark, or else he will die, because I appear in the cloud over the atonement cover.” (Leviticus 16:2)

“…the ark of God, which is called by the Name, the name of the Lord Almighty, who is enthroned between the cherubim that are on the ark.” (2 Samuel 6:2)

“O Lord Almighty, God of Israel, enthroned between the cherubim, you alone are God over all the kingdoms of the earth.” (Isaiah 37:16)

Above the ark and the atonement cover, God appeared in His glory in “unapproachable light” (1 Timothy 6:16). This light is sometimes referred to as the Shekinah glory. The word Shekinah, although it does not appear in our English bibles, has the same roots as the word for tabernacle in Hebrew and refers to the presence of the Lord. 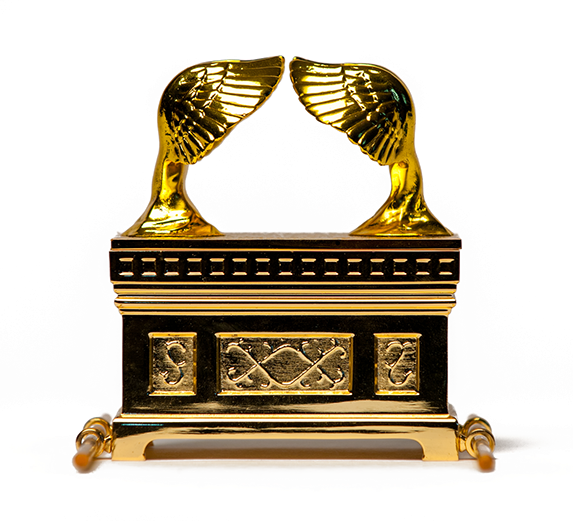 Because the ark was God’s throne among His people, it was a symbol of His presence and power with them wherever it went. There are quite a number of miracles recorded in the Old Testament surrounding the ark: With the presence of the ark, the waters of the River Jordan divided so the Israelites could cross on dry land, and the walls of Jericho fell so that the Israelites could capture it (Joshua 3:14-17, 6:6-21). Yet the ark could not be treated with irreverence because it was also a symbol of God’s judgment and wrath. When the Israelites fought their enemies the Philistines during the time of the prophet Samuel, they disregarded the commands of the Lord and took the ark out to the battlefield with them, “summoning” God’s presence. God caused the Philistines to win the battle and “the glory departed from Israel, for the ark of the Lord was taken” (1 Samuel 4:22). However, God showed His power to the Philistines when He caused their idol, Dagon, to fall to the ground when the ark was placed next to it, and several Philistine cities were plagued heavily when the ark was in their midst (1 Samuel 5). Ultimately, the ark was returned to Israel. 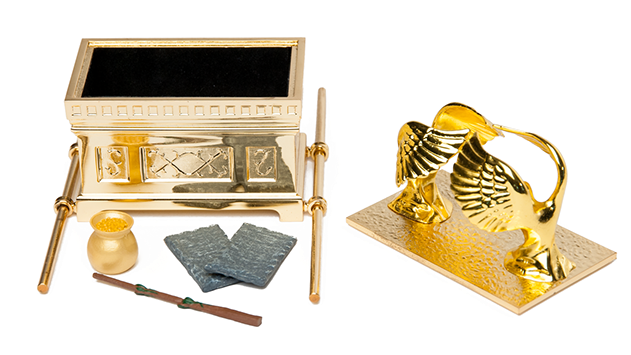 Articles in the Ark of the Covenant

What may seem strange to us today is that, hidden in the special golden box representing God’s presence were not treasures and precious gems, but three unlikely items: a jar of bread, a stick and two stones. What were these curious keepsakes and why did God want them in His ark?

The three articles represented some of the most embarrassing and disgraceful events in the history of the Israelites.

First, the pot of manna:

“This is what the Lord has commanded: ‘Take an omer [portion for one man] of manna and keep it for the generations to come, so they can see the bread I gave you to eat in the desert when I brought you out of Egypt.’” (Exodus 16:32)

God had provided this bread-like food for the Israelites when they grumbled during the wanderings in the desert. It was bread from heaven! He continued to provide the food daily and faithfully, but the people were not one bit thankful. They complained and wanted something else. The pot of manna was an uncomfortable reminder that despite what God had provided for them, the Israelites had rejected God’s provision.

Second, Aaron’s staff that had budded: The people, out of jealousy, rebelled against Aaron as their high priest. To resolve the dispute, God commanded the people to take 12 sticks written with the names of the leader of each tribe and place them before the ark overnight. The next day, Aaron’s rod from the house of Levi had budded with blossoms and almonds. God confirmed his choice of Aaron’s household as the priestly line.

“And the Lord said to Moses, ‘Put back the staff of Aaron before the testimony, to be kept as a sign for the rebels, that you may make an end of their grumblings against me, lest they die.’” (Numbers 17:10)

The staff reminded the Israelites that on more than one occasion, they had rejected God’s authority.

“Now if you obey me fully and keep my covenant, then out of all nations you will be my treasured possession. Although the whole earth is mine, you will be for me a kingdom of priests and a holy nation.” (Exodus 19:5-6)

The Israelites had said heartily, “All that the Lord has spoken we will do,” in response to God’s covenant (Exodus 19:8). But how did they fare in fulfilling their end of the contract? Miserably. It was impossible for them to keep the Ten Commandments perfectly. Over and over again, they violated God’s holy Law, and God made it clear to them the consequences of their sin by sending plagues, natural hazards and foreign armies upon them. The stone tablets in the ark were a reminder that the Israelites had rejected God’s right standard of living.

These three articles were preserved in the ark throughout Israel’s history as an unpleasant symbol of man’s sins and shortcomings, a reminder of how they rejected God’s provision, authority and right standard of living. It pointed to man as a helpless sinner.

It may have been uncomfortable to think that God’s splendor was so close to the three articles associated with man’s sinfulness. But this is where God’s provision comes in. When God looked down from His presence above the ark, He did not see the reminders of sin. They were covered by a necessary object — the atonement cover.

Every year, the high priest would enter the Holy of Holies on the Day of Atonement. Bringing burning incense to shield his eyes from a direct view of God’s glory, he sprinkled blood from a bull onto the atonement cover for his and his household’s sins, then sprinkled blood from a goat for all the sins of Israel. God promised that when He saw the blood, it would cover over man’s sin. (To atone for means to cover over — hence the name atonement cover.) God did not see the sin anymore but the provision instead, and it appeased His wrath.

The Israelites found acceptance with God by believing His word to be true — that when their sins were covered by blood, God temporarily overlooked their sins as if they had been obliterated. But Jesus Christ has become our permanent atonement cover. Through Jesus’ blood, our sins have been covered over. When God looks at us, He doesn’t see our sin, but the provision: His own Son. Jesus lay down His life for us as an innocent sacrifice so that God would look on us and see His perfection.

The atonement cover was God’s throne in the midst of the Israelites. God is on His throne today in heaven and Jesus, our high priest, is at His right side. When we come to God now, we approach a throne of grace.

“Let us then approach the throne of grace with confidence, so that we may receive mercy and find grace to help us in our time of need.” (Hebrews 4:16)

Articles in the Ark — Revisited

The three items in the ark that served as a sore reminder of man’s shortcomings have taken on a different meaning since Jesus Christ redeemed us from our sins. Let’s review the three articles and see how they point to Christ.

Second, Aaron’s budding staff: Jesus didn’t reject God’s authority. Instead, He submitted Himself to the Father’s will and died on the cross.

But He came back to life like Aaron’s budding rod, “the firstfruits from the dead” (1 Corinthians 15:20).

Third, the Ten Commandments: Jesus didn’t reject God’s right standard of living. He lived a sinless life and obeyed God’s law perfectly, becoming our perfect sacrifice and intercessor. His sacrifice instituted a new covenant that was not based on the Law.

* The word atonement carries with it the idea of the just, holy, righteous side of God's nature being satisfied. God's law required death as the penalty for sin. When God saw the death of the innocent sacrifice, he was satisfied that the demands of his law had been carried out. Sacrificing an animal on an altar did not take away the sin. Man was still sinful. The sacrifice only pictured what was necessary for sin to be forgiven—death and shedding of blood. The blood provided an atonement or covering for sin. (Source: The Stranger on the Road to Emmaus by John R. Cross, published by GoodSeed International)

<< Previous: Holy of Holies and the Veil