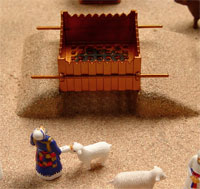 The brazen altar, bronze altar, or altar of sacrifice was situated right inside the courtyard upon entering the gate to the tabernacle. The Hebrew root for altar means “to slay” or “slaughter.” The Latin word alta means “high.” An altar is a “high place for sacrifice/slaughter.” The altar stood raised on a mound of earth, higher than its surrounding furniture. This is a projection of Christ, our sacrifice, lifted up on the cross, His altar, which stood on a hill called Golgotha.

The altar was made of wood from the acacia tree and overlaid with bronze (usually symbolic of judgment on sin in the Bible), measuring 7.5 feet on all four sides and 4.5 feet deep. Four horns projected from the top four corners and a bronze grating was inside to hold the animal.

The altar was the place for burning animal sacrifices. It showed the Israelites that the first step for sinful man to approach a holy God was to be cleansed by the blood of an innocent creature. For a sin offering, a person had to bring an animal — a male one without blemish or defect from the flock or herd — to the priest at the tabernacle gate.

“He is to lay his hand on the head of the burnt offering, and it will be accepted on his behalf to make atonement for him.” (Leviticus 1:4)

By laying his hand upon the head of the offering, the person was identifying with the sacrifice. His sin and guilt was being moved from himself to the animal. The priest would then slaughter the animal, sprinkle its blood in front of the veil of the Holy Place, burn the sacrifice, and pour the rest of it at the bottom of the altar. Blood is a significant agent of atonement (i.e., covering for sin) and cleansing in the Old Testament.

“For the life of a creature is in the blood, and I have given it to you to make atonement for yourselves on the altar; it is the blood that makes atonement for one's life.” (Leviticus 17:11)

“The law requires that nearly everything be cleansed with blood, and without the shedding of blood there is no forgiveness.” (Hebrews 9:22)

The Significance of the Tabernacle Sacrifices

Although the blood of the sacrifices covered over the sins of the Israelites, they had to perform the sacrifices year after year, for they were not freed permanently of a guilty conscience. However, Jesus Christ, the Lamb of God, came as the ultimate and last sacrifice for mankind when He offered up His life. As Isaiah prophesied, the Christ would be like a lamb that is led to slaughter and pierced for our transgressions. His blood was sprinkled and poured out at the cross for us. The Bible says much about this:

“The blood of goats and bulls and the ashes of a heifer sprinkled on those who are ceremonially unclean sanctify them so that they are outwardly clean. How much more, then, will the blood of Christ, who through the eternal Spirit offered himself unblemished to God, cleanse our consciences from acts that lead to death, so that we may serve the living God!” (Hebrews 9:13-14)

“We have been made holy through the sacrifice of the body of Jesus Christ once for all. …By one sacrifice he has made perfect forever those who are being made holy. …And where these have been forgiven, there is no longer any sacrifice for sin.” (Hebrews 10:10, 14, 18)

God made him who had no sin to be sin for us, so that in him we might become the righteousness of God.” (2 Corinthians 5:21)

Horns were a symbol power and strength in biblical times. When the sacrifice was made, blood was dabbed on the horns of the altar, signifying the power of the blood to atone for sins. In the same way, there is mighty power in the blood of Christ. Jesus is the “horn of our salvation” (Psalm 18:2, Luke 1:69).

The animal sacrifices bore reference to the Passover lambs, which the Israelites slaughtered in like manner to save their firstborns from the last plague of God's judgment on Egypt (Exodus 12:1-13). Similarly, as the Passover lambs were eaten after they were slaughtered, some of the sacrificial lambs also were eaten. Just as the sacrificial lambs were sacrificed and eaten, so Jesus' body was sacrificed and "eaten." It was no coincidence that on the night before the Passover when Jesus was crucified, He “took bread, gave thanks and broke it, and gave it to his disciples, saying, ‘Take and eat; this is my body’” (Matthew 26:26). Earlier Jesus had taught His disciples:

Jesus Himself is the Lamb of God as well as the Passover Lamb for those who believe in Him.

* The word atonement carries with it the idea of the just, holy, righteous side of God's nature being satisfied. God's law required death as the penalty for sin. When God saw the death of the innocent sacrifice, he was satisfied that the demands of his law had been carried out. Sacrificing an animal on an altar did not take away the sin. Man was still sinful. The sacrifice only pictured what was necessary for sin to be forgiven—death and shedding of blood. The blood provided an atonement or covering for sin. (Source: The Stranger on the Road to Emmaus by John R. Cross, published by GoodSeed International)