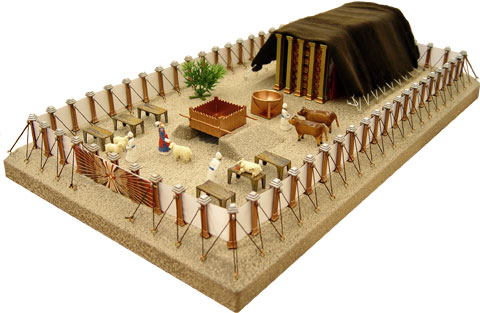 The tabernacle is a visual dwelling

Tabernacle means “tent,” “place of dwelling” or “sanctuary.” It was a sacred place where God chose to meet His people, the Israelites, during the 40 years they wandered in the desert under Moses’ leadership. It was the place where the leaders and people came together to worship and offer sacrifices.

The tabernacle was first erected in the wilderness exactly one year after the Passover when the Israelites were freed from their Egyptian slavery (circa 1450 B.C.). It was a mobile tent with portable furniture that the people traveled with and set up wherever they pitched camp. The tabernacle would be in the center of the camp, and the 12 tribes of Israel would set up their tents around it according to tribe. The instruction on how to build the tabernacle was first given to Moses in the wilderness, who then gave the orders to the Israelites.

“Then I will dwell among the Israelites and be their God. They will know that I am the Lord their God, who brought them out of Egypt so that I might dwell among them.” (Exodus 29:45-46)

And so God dwelled among His people in the tabernacle in the wilderness. He appeared as a pillar of cloud over the tabernacle by day and a pillar of fire by night in the sight of all Israel. The people would not set out on their journey unless the cloud lifted. It was an unmistakably powerful visual statement indicating God’s presence among them.

God knew that the Israelites needed visual evidence of His presence. When Moses went up to Mount Sinai for 40 days and the people did not see or hear from him, they grew impatient and gathered their gold to form a golden calf that they worshiped in place of God. After ten generations of living in Egypt, it was not surprising that the Israelites mimicked the Egyptians in fashioning a visual idol of their own. This act of disobedience demonstrated their need to follow and worship a God who was visually tangible. God’s provision of a tabernacle — itself a splendor to behold — not only allowed the people to sense His presence, but also to see their leader go in to meet with God in a concrete place and not disappear up a mountain.

The tabernacle of Moses is a lesson of unquestionable authority

The tabernacle was more than just a dwelling place. All the components of the tabernacle were part of an intricate visual aid to illustrate God's relationship with His people. One aspect of this relationship was God’s requirement for complete obedience. God told Moses to create the tabernacle exactly the way He commanded. It was not to stray from God’s blueprint.

“Make this tabernacle and all its furnishings exactly like the pattern I will show you.” (Exodus 25:9)

To this end, God gave very specific instructions about the size of each component and the materials the Israelites were to use, as we will see in the following sections of this discussion. These seemingly cumbersome rules were not intended to burden the people, but to show God’s unquestionable authority and holiness, and emphasize that people could only come to God on God’s terms, not on their own. They had to obey reverently not only in the construction of the tabernacle, but also in the way they worshiped. Any irreverence or ritual uncleanness could result from an individual being cut off from his people or in death.

For example, the anointing oil for the tabernacle and the incense for the altar of incense (made from God’s own prescribed formulas of spices) were both declared holy by God and could only be used for the purpose of the tabernacle; anyone else using the same formula for their own consumption would be cut off from Israel (Exodus 30:34-38). The special garments for the priests were holy; if they did not wear the right clothing in serving the Lord, they could die (Exodus 28:2, 43).

The wilderness tabernacle is a projection of God’s redemptive plan

In the New Testament, John writes: “The Word became flesh and made his dwelling among us.” (John 1:14) This word “dwelling” is the same word for “tabernacle” in the Old Testament. In other words, God came in living flesh to dwell or to tabernacle among His people. As He walked upon the earth and lived among the Jews, Jesus Christ Himself fulfilled the picture of the Old Testament tabernacle. In that and many other ways, as we will see, the tabernacle really was a prophetic projection of the Lord’s redemptive plan for His people.

“And I heard a loud voice from the throne saying, ‘Now the dwelling of God is with men, and he will live with them. They will be his people, and God himself will be with them and be their God.’ ” (Rev. 21:3)

The components of the tabernacle:

Diagram of the Tabernacle and Basic Layout

Brazen Altar and the Tabernacle Sacrifices

Holy of Holies and the Veil

Ark of the Covenant 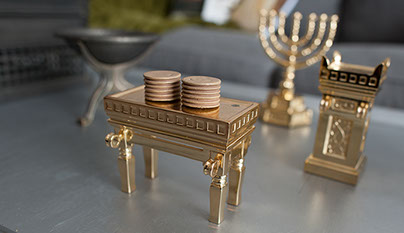